The true origins of chess are not known, which allows people to say pretty much anything they want about the creation of the game and its original purpose or form without having anyone to be able to prove them wrong. 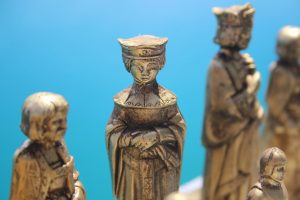 he evidence that does exist suggests that chess or a game very similar to chess was first invented in Northern India about 600AD. It eventually migrated to China, Persia (modern-day Iran) and then made its way to Europe.

Learning and mastering the game took a lot of time, which is something that common people did not have back then. The game undoubtedly was a way to spend time for the upper classes of the society. The chessboards in the medieval time were made of expensive and exquisite materials.

The game has a square board and six different kinds of pieces. In the game, the king and the chief advisor led the Indian Army

. The army included soldiers, chariots, cavalry, and elephants, all of which has corresponding pieces in the game.

chess started to appear. The oldest surviving publication comes from 1497. In the eighteenth century, France became the center of chess life in Europe. In the nineteenth century chess has been becoming more and more popular. There have been many chess clubs, chess books and articles about the game. The London Chess Club played a correspondence match with the Chess Club of Edinburgh in 1824. Newspapers started including chess problems on a regular basis. The first modern chess competition occurred in London in 1851.