King safety is the most important of all elements in the game of chess for a simple reason: if the king is under threat, then nothing else really matters. You can have many more pieces in your pocket than your opponent does, but if your king gets checkmated, you will lose the game. This is why it is so important to protect the king. 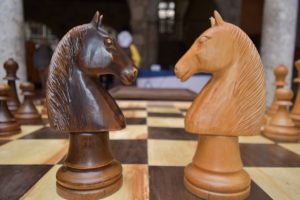 By securing the king in the very beginning of the game, you can later start attacking your opponent with a piece of mind.

Many chess games begin with bringing the king to safety using castling, a move that brings the king closer to one of the corners of the board. The big idea is to begin attacks once you secure your king. At the same time, protecting your king with all the pieces that you have is not efficient because in this case your attacks will not be as effective. Experienced chess players typically protect the king with one or two pieces, including a knight and several pawns.

You need to be very careful about moving the pieces away from your king and opening lines of attack.