The basic building blocks of the game of chess are pawn structure, king safety, development, material, and space. If you want to increase your knowledge of chess, you should get an understanding of these individual elements. These elements are constantly interacting with each other and sometimes one 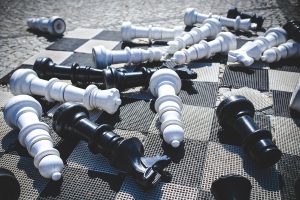 is far more important than the others.

Space is an essential element because the player that controls the most space controls the game. Moving your pieces on the board is easier when you have space than when you don’t. If you are not in charge of space, you can’t always move your pieces to where you want them on the board. The battle is usually most brutal in the center, in the squares e4, e5, d4, d5. Controlling the center of the board is similar to having control of strategic areas of a battlefield. Control describes the number of squares that you are attacking. If your opponent is attacking the same squares at the same time, they are being contested and space doesn’t belong to anyone. Both players start the game with the same amount of space. Whites always have the first temporary advantage because they get to move first.